A year of ad tech in review: drastic change in digital publishing 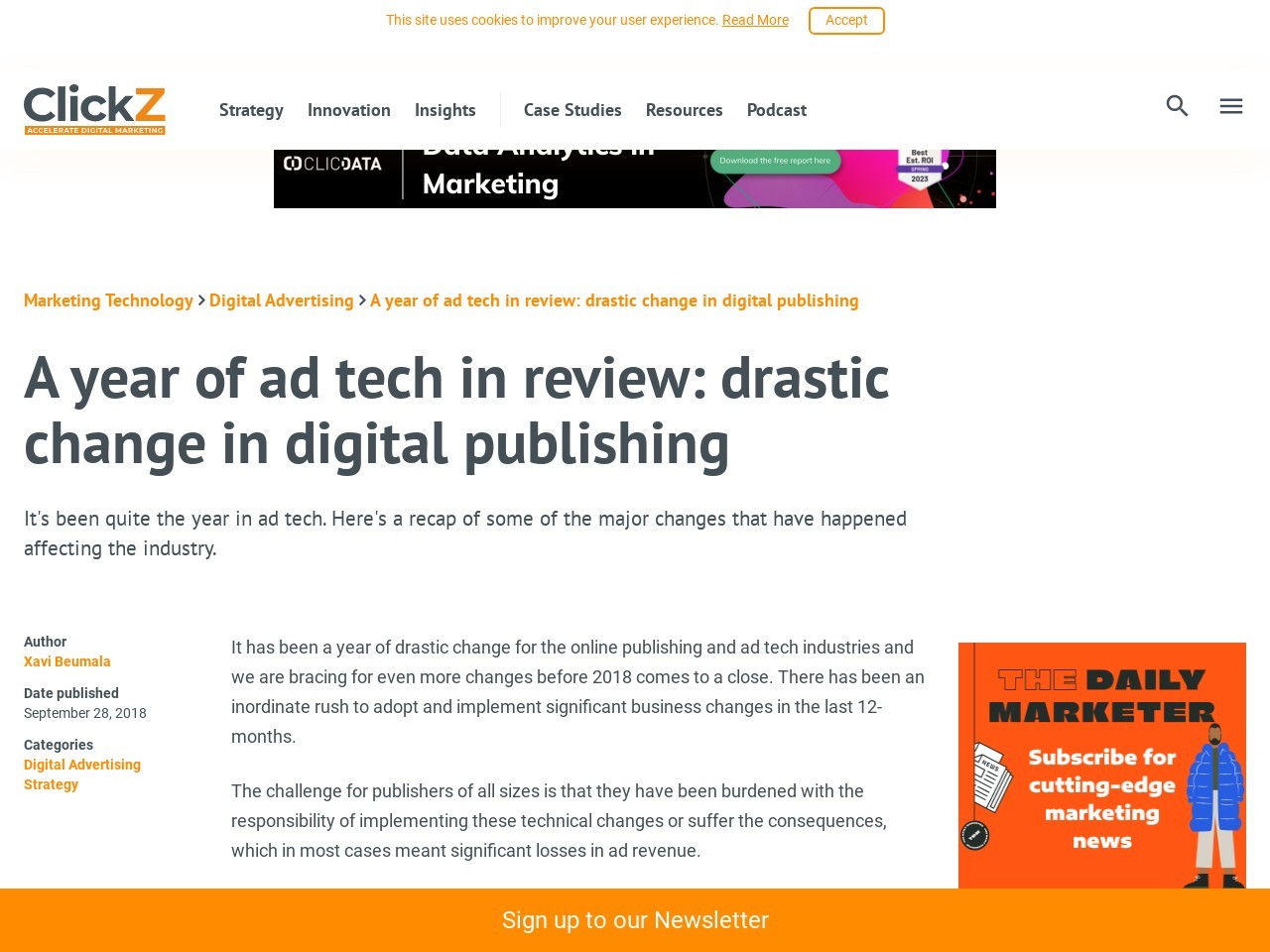 It has been a year of drastic change for the online publishing and ad tech industries and we are bracing for even more changes before 2018 comes to a close. There has been an inordinate rush to adopt and implement significant business changes in the last 12-months.

The challenge for publishers of all sizes is that they have been burdened with the responsibility of implementing these technical changes or suffer the consequences, which in most cases meant significant losses in ad revenue.

More than any other year in recent memory, 2018 has really tested the business models of all publishers. It’s only logical to understand that another year like this, where the gatekeepers of digital publishing suddenly, and significantly change the rules of the game, would be problematic.

The tough part is that it’s hard to quibble with the stated goals of these initiatives. But so much has been forced on the industry. It’s been shake-up after shake-up with publishers and ad tech scrambling to comply in order to keep their heads above water.

Here is a quick rundown:

The Interactive Advertising Bureau (IAB) launched ads.txt (authorized digital sellers) to reduce domain spoofing and arbitrage inventory in the open marketplace. This is a text file that lives on a publisher’s web server to inform the buy side of who should be selling inventory programmatically. From mid-October 2017, Google and other buyers stopped buying inventory on sites that didn’t have or include all correct providers on their ads.txt.

In response to backlash from critics in regards to facilitating misinformation from foreign entities in connection with the most recent U.S. presidential election, Facebook changed its news feed algorithms to de-prioritize posts shared by businesses and media outlets in favor of content produced by a user’s friends and family. This was catastrophic financially for many publishers where Facebook was a dominant traffic source. It also led to the demise of several online publications.

In order to combat consumer frustration with online ads that disrupt their experience, interrupt content and slow browsing, the Coalition for Better Ads was formed to develop and implement new global standards for online advertising. It established the type of ads that fell below a threshold of consumer acceptability (and would increase the propensity for consumers to adopt ad blockers). In tandem, Google released the Ad Experience Report which systematically audits sites for any invasive ads. If sites fail the Ad Experience Report and fail to rectify the intrusive ads or extensive ad density, Chrome activated an ad blocker to block that publisher’s ads across their domain.

Although there was ample warning, the ambiguity of this law forced publishers to rush and develop, deploy or utilize third-party consent mechanisms, like CMPs (Consent Management Platforms), to ensure GDPR compliance. Consent implementation could have been handled at the operating system level (iOS and Android) making the transition to compliance much smoother and universal. Instead, it’s been a major hassle for many publishers involving more questions and more lawyers.

An initial fallout of GDPR is that ad tech firms find themselves “in the middle of a rock and hard place” when it comes to GDPR compliance. Already placed in an uncomfortable position to provide a safe environment where all the data is processed with proper consents, ad techs still need to provide publisher’s with programmatic ad revenue to help keep them in business. It places the industry in the de facto, yet untenable position of playing the role of judge and jury in deciding whether or not it makes sense to be fully GDPR compliant in certain situations.

GDPR’s implementation, in general, triggered an initial tailspin for programmatic ad buying that has since recovered. However, many U.S. websites chose to not deal with GDPR and simply ceased operating in the European Union.

Google Chrome unleashed what amounted to a cattle-prod to force publishers to upgrade from unencrypted websites by basically doxing those that didn’t adopt HTTPS as “non-secure.” While a strong majority of Chrome traffic is already encrypted, the process of migrating to HTTPS is becoming easier, and the reasons to adopt HTTPS are undeniably positive, this became a big headache very quickly for those sites that haven’t obtained new HTTPS certs from other authorities.

Google decided to make fast page loads a new factor in search rankings for mobile sites with slower sites sinking lower in search results. While it’s readily acknowledged that page loading speed has undeniable benefits (longer sessions, lower bounce rates, and higher ad viewability) and is certainly worth the effort, it basically represented another can’t ignore edict that forced publishers to quickly make some hard decisions about their infrastructure so as to not fall behind in terms of user engagement and revenue.

What was called a “broad core” algorithm update was the most recent curveball thrown at the ad tech industry by Google and, again, catching many publishers by surprise. This change resulted in lost traffic and revenue for websites known as YMYL sites (“Your Money Your Life”).  These are sites with a lot of health, medical, diet, nutrition, financial stability, or happiness content.

Everyone understands change is a constant in the business world. But such a relentless influx of change, combined with the knowledge that more is coming, increases the threat that the business models of professional digital publishers become harder to execute. Then you wonder about the successful monetization of the online publishing industry and keeping content “free” sustained by ads. How can it be maintained when publishers and ad tech companies are continually thrust into a “whack a mole” approach to solving the problems caused by so many sudden changes? How long can an ecosystem implement sudden and critical changes – even if it’s for the betterment and evolution of the web – before it corrupts the content that’s provided to consumers? The only conclusion you can draw right now, looking at the big picture, is that it’s complicated.

Xavi Beumala is the CEO and co-founder of Marfeel, an ad tech firm based in Barcelona, Spain. Marfeel specializes in the optimization of mobile websites by delivering meaningful, resonating content that publishers produce to their readers as quickly, and as smoothly as possible.

The post A year of ad tech in review: drastic change in digital publishing appeared first on ClickZ.